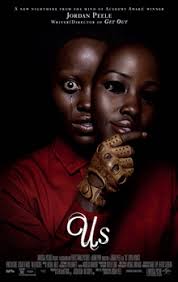 Us is Jordan Peele’s follow-up to 2017’s Get Out, but this time follows a family (including Winston Duke and Lupita Nyong’o) who travel to their beach home and are hunted by people that look exactly like them.

I hold Us in equal regard with Get Out, which was one of my favorite movies of 2017, but for somewhat different reasons. Both Us and Get Out work at the surface level as a couple of really entertaining movies, but what’s interesting about this one is that it plays more as a puzzle that slowly decodes itself and leaves a chunk of itself for you to figure out, whereas Get Out reveals its deeper meanings and layers the more you think about it. There are many ways to interpret Us, but I think the multitude of ideas that this plays with makes the overall impact a bit less punchy than it was with Get Out. But I’m gonna stop comparing the two and go into what makes this so great.

As I said before, purely as a horror movie, this works in spades. It’s Jordan Peele, so you expect more than just a standard horror flick, and there is more, but as far as the horror aspect, this delivers. You can feel the atmosphere that he creates here constantly. This is supported by both his phenomenal script and the performances in this. Lupita Nyong’o gives the (double) performance of a lifetime. She’s captivating to watch as Red, and what she brings to her double’s character makes it so much more disturbing and at the same time interesting to watch. On the flip side, as Adelaide, she’s just as good, and you buy into her character completely and really want to root for her. This is, at the core, a story about her character. The entire supporting cast is great, though. Winston Duke brings a lot of levity here, and is often pretty hilarious as Gabe, Adelaide’s husband, playing into the suburban dad in a way that doesn’t seem like it’s trying too hard to wring out laughs but also works during the horror set-pieces. Both of the kids are great, and equally creepy as their doubles. Elizabeth Moss and Tim Heidecker also bring a lot to the couple that the family is friends with.

Also, the score here really stood out, and was creepy in all the right moments. Regarding the script, it’s able to balance horror and comedy really well. The jokes never stick out in a bad way, and (probably because it’s Jordan Peele directing, who’s spent so much time in comedy), the movie feels just like a really dark comedy sometimes, and has this ability to scare you and then have you crack up seconds later. It also injects social commentary into this in a way that has you asking more questions as it goes on, and you form your own idea of what the movie’s trying to say when commenting on duality. The script is, as we would expect from Peele, twisty, but I’m not gonna say another word about that because it’s best left unspoiled.

The movie does loosen its grip on the narrative as it goes along, which both works for and against it. It makes the plot a little messier and more susceptible to “plot holes.” It starts as more or less a home invasion thriller, but turns into something more, and while this is compelling, it leads to a lot of questions. Another remarkable thing about this is the way Peele packs the screen with motifs, clues, Easter eggs, and foreshadowing about what’s to come, similar to how he did in Get Out. It’s fun to pay close attention to the screen, and try to find hints about what everything means. A common complaint about this movie is that there’s a big exposition dump around the end that removes some of the mystery from the movie, and while it does lose a bit of intrigue, it still leaves questions that aren’t answered yet, and I don’t think it’s as big of a down as many say.

Overall, Us was a well-directed, darkly funny, and, yes, creepy horror thriller that not only is great at being a horror movie, but provides a lot to unpack.