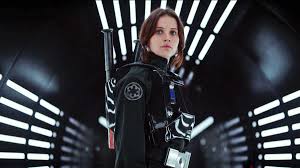 Rogue One: A Star Wars Story, or simply Rogue One, is the 8th addition in the Star Wars franchise, but falls between Episodes III and IV. Rogue One is about how and why the Rebels steal the plans for the Death Star, a weapon of mass destruction made by the Empire. It’s mainly about Jyn Erso, a criminal who’s father was integral to the building of the Death Star and she, along with a team, tries to steal the plans. If you haven’t seen any Star Wars movies before, don’t worry: all you need to know is this: the Empire is evil and building the Death Star, while the Rebels are good and fighting against them. However, there is a lot of awesome fan service that won’t make sense if you haven’t seen other Star Wars movies.

Rogue One, overall, is spectacular. It is definitely one of my favorite Star Wars movies, and does so many things right, although it isn’t perfect.

Jyn Erso, played pretty well by Felicity Jones, is awesome! Her motivations become quite clear, and her character is pretty well developed.

Captain Cassian Andor, who recruits the team, has a pretty cool character, and he shows that the Rebels aren’t squeaky clean and have to make tough decisions, which adds previously unseen layers to them.

Andor’s reprogrammed Imperial droid, K-2SO, is probably one of my, if not my favorite, character. He’s voiced by Alan Tudyk and is a more sarcastic, aggressive, and cold C-3PO. K2 is one of my favorite droids, and whether he’s making sarcastic comments to Jyn Erso or effortlessly knocking down Imperial Troops, he is awesome and hilarious.

Chirrut Îmwe, a blind warrior recruited by Andor is tied for my favorite character with K2. His character is shown believing in an ancient religion (the Force) in a dark time of war, which elevates him from just a guy with a cool fighting style that kicks more butt than anyone else. Baze Malbus, Chirrut’s friend is sort of just…there, and doesn’t do much except crack a couple of one-liners.

Bodhi Rook, an Imperial pilot that redeems himself, has a good character arc as he puts his life on the line for the rebels.

Orson Krennic, the main villain who was critical to the Death Star, has a character that does a pretty good job of feeling menacing. Darth Vader, one of the most iconic movie villains of all time, is there, but not for a long time–don’t expect any more than about 4 minutes of screen time for him, although he does have one AMAZING scene at the end, and quite possibly my favorite scene.

Finally, Saw Gerrara, a character from The Clone Wars is there, and delivers one cool scene, but he isn’t present much.

Another thing that Rogue One does really well is create a world that feels lived in, whether you see the attention to detail in a busy marketplace or a crowded temple.

Rogue One’s first act was a bit of a slog and was slow. We are introduced to characters like that, and we don’t really have time to take in the environment or characters we meet. A lot of them don’t really have a backstory either. And aside from one cool action sequence, it moves slowly and doesn’t cut to the chase quite then. The second act speeds up a little bit, but, wow, the third act is amazing. It adds a new level of intensity and war to Star Wars, and is an edge-of-your-seat thrill ride with amazing action and visuals. It adds to the grit of Rogue One and makes it feel truly like a war movie.

The action and visual effects

Rogue One looks great. The visuals are nothing short of flawless, and although there is one CGI character that’s distracting, Rogue One knows how to capture the spectacle of a Star Wars movie. The space battles, especially in the third act, look like the best CGI we’ve seen yet, as well as the smaller, more gritty conflicts. The action as well, is amazing and it has plenty of time to show this off, as it is, at heart, a war movie. It’s thrilling, gritty, and even funny in all the best ways.

Overall, Rogue One is one of the best Star Wars movies that is definitely worth checking out.

2 thoughts on “Rogue One: A Star Wars Story- Movie Review”