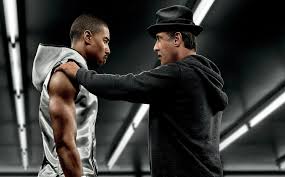 Creed is an excellent movie about Adonis Johnson, the son of Apollo Creed, who passed away before he was born. He moves to Philadelphia to be trained by Rocky Balboa, the former opponent and close friend of his father. Johnson soon gets an opportunity to fight in the light heavyweight division, taking on the last name “Creed”.

Overall, Creed is an entertaining and marvelous boxing movie that not only Rocky fans would enjoy, but also those new to the series.

Creed has spectacular performances by Sylvester Stallone, who plays the famous boxer Rocky Balboa, and Michael B. Jordan, who plays the main character, Adonis Creed.

The training sequences are fantastic; for example, Creed races a band of motorcycles across the streets of Philadelphia. The last fight, in which Adonis competes against an undefeated fighter named Ricky Conlan, is breathtaking and has you cheering by the end. And in between scenes, Creed has the humor to keep the movie entertaining.

Check out the Creed 2015 Official Trailer!