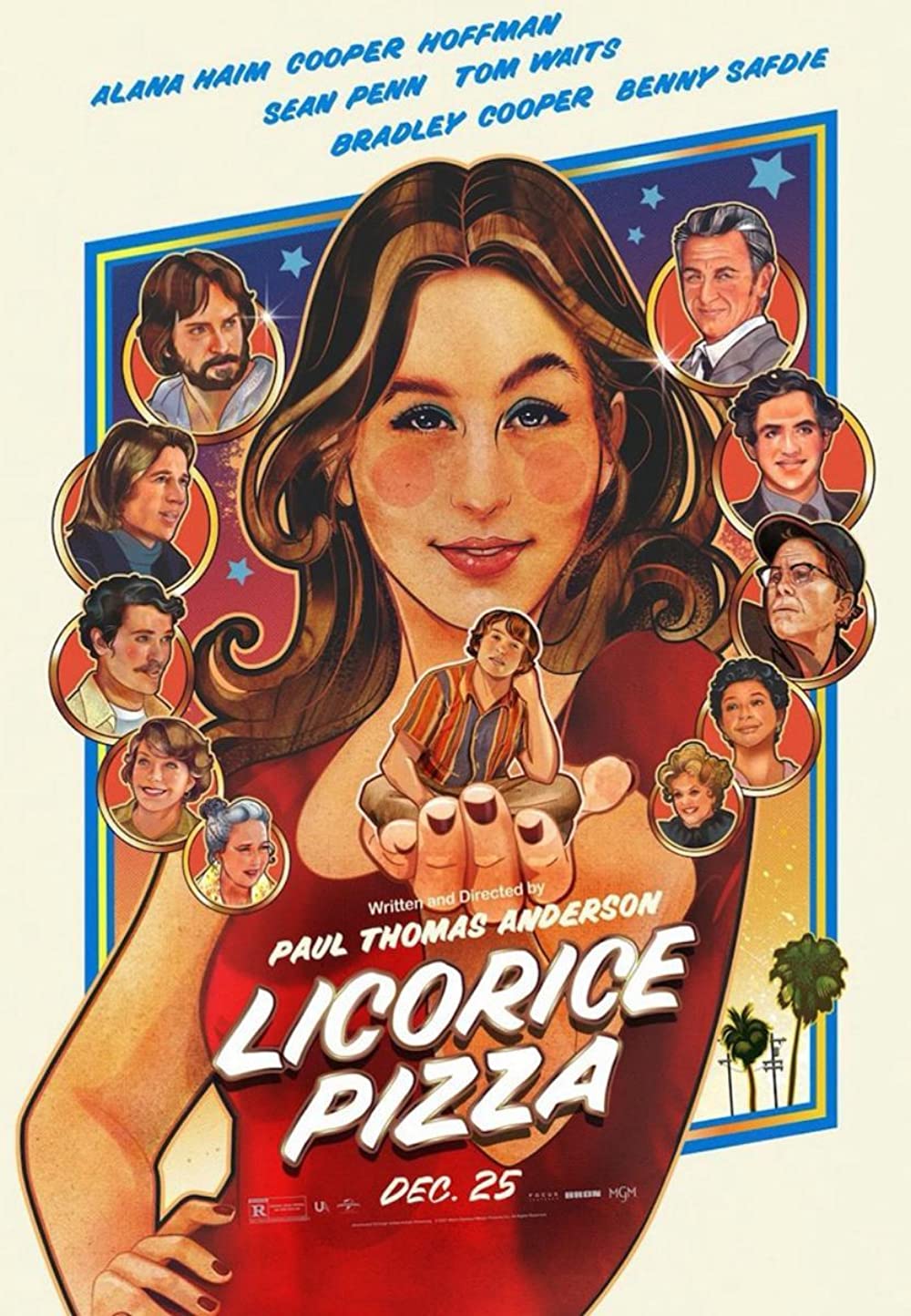 Known for his San Fernando Valley-set dramas, director Paul Thomas Anderson’s latest is a coming-of-age film starring two exceptional first-time performers — Alana Haim of indie pop band HAIM and Cooper Hoffman (son of the late Philip Seymour Hoffman). The film is loosely based on Anderson’s experiences growing up in the Valley, structured largely through a series of vignettes that rope in a colorful ensemble cast including Sean Penn, Tom Waits, Bradley Cooper, and Benny Safdie.

It’s difficult to isolate what exactly works so well in Licorice Pizza, an undeniably sweet, mature film that lacks the darkness that pervades so much of Anderson’s other work. The film is told with a deeply nostalgic lens visible in both his colorful photography of the Valley and in the memorable anecdotal one-offs that comprise the screenplay. Every single new character we meet, whether bit part or recurring presence in the film, is instantly memorable and well-colored in. This can also be credited to the excellent ensemble, each performance operating at 100%, with the clear standout being Bradley Cooper’s 20-minute role as Barbara Streisand’s real-life boyfriend, Jon Peters. Cooper brings an unmistakable magnetic energy to the character, who crosses paths with our two protagonists for a hilarious, thrilling extended sequence.

Many of these vignettes don’t progress the plot in any significant way, but that couldn’t be farther from their point. Anderson has cited Fast Times at Ridgemont High, the quintessential plotless hangout film, as a key influence for Licorice Pizza, and it’s clear why: he’s far more concerned with painting a full picture, or rather idealized portrait of his memory of the time centered around the two electric lead performances. Even beyond Hoffman and Haim’s characters, Anderson shows such a deep affection for all of his characters, and the closeups that best characterize his visual style here extract such a well of emotion from each actor. It certainly doesn’t hurt that Hoffman and Haim simultaneously give two of the most charming performances in recent memory; Hoffman has a charisma about him visible within the first minute of the film’s runtime, and Haim brings a gravitas to the character of Alana that bounces perfectly off her costar.

Together, the two propel the film to true emotional highs that ebb and flow until the film arrives at a natural, satisfying conclusion. Considering just how plotless Licorice Pizza is, its ability to invest you in the central relationship and emotionally and narratively pay it off over the ensuing two hours is remarkable.

Licorice Pizza is a film firing on all cylinders: Anderson’s genuinely breathtaking direction is perfectly married with his heart-swelling screenplay and supported by performance after performance of both veteran and first-time actors giving the film their all.