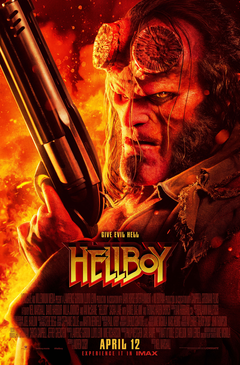 A reboot of the Guillermo del Toro directed Hellboy series of the 2000s, Hellboy stars David Harbour and is directed by Neil Marshall.

As far as positives go, there was one action sequence that was somewhat enjoyable, and the last three minutes were basically better than the entire runtime; they felt like what the rest of the movie should have been. The visual effects were really weak, sometimes downright silly looking. Most of the time, they looked too fake to have the intended effect, and they tried to go for a horror aspect in one scene, but it instead came off tiring and took me out of the movie. There were some bizarre editing choices littered throughout, a nice complement to the terrible dialogue in basically every scene.

They try to make Hellboy quip during fight scenes and after the first one or two, it got ridiculously exhausting to watch. It constantly tries to be self-aware, but because of the truly awful script, it just feels grating. The plot makes practically no sense and its attention span is embarrassingly short. It jumps from idea to idea with so little coherence, again made worse by the editing, and I don’t think there’s a scene in here where they don’t shout exposition at you. The gore was purposeless, and similar to the VFX, way too goofy to enjoy. Every line in this that was featured in the trailer somehow played worse here.

Despite the somewhat entertaining trailers, Hellboy was actively hard to watch, and it’s hard to even recommend it as something to laugh at or hate watch.