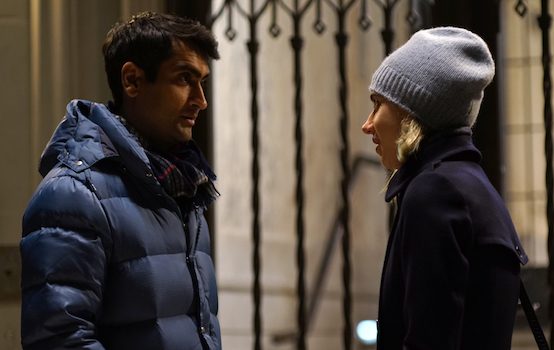 The Big Sick tells the real life story of how Pakistani comedian Kumail Nanjiani (played by himself) met his wife Emily Gordon (portrayed by Zoe Kazan). As he struggles as a stand-up comedian and grows closer to Emily, he dies their relationship from his traditional family.

Bursting with heart and humor, The Big Sick is a great rom-com that not only feels authentic, but also touching and quite hilarious. DISCLAIMER: The Big Sick is Rated R for language.

The Big Sick nails the comedy aspect. The movie is truly very funny, and always manages to bring in humor, even in the saddest of scenes. Kumail Najiani is hysterical playing himself and has some really funny bits in the film. The entire cast, however, also gets to have their comedic moments, with Ray Romano and Holly Hunter, who play Emily’s parents, also standing out. This movie is very smartly written, both in the comedy scenes and in more emotional ones.

Everyone provides fantastic, sincere performances here. Zoe Kazan does great as Emily Gardener, and the cast is all-around very likable. Her and Kumail have great chemistry, making the romance very believable. As I said before, Kumail, Ray Romano, and Holly Hunter all shine as their respective characters continue to bond and form unique relationships throughout the course of the film.

The Big Sick has tons of heart. It’s very touching and there are many sweet moments. It also feels very authentic and never forced, as it is based on a true story: all of the interactions and emotional payoffs feel organic and earned. It’s also very realistic. It captures how both Kumail’s and Emily’s cultures function and how they are forced to adapt to each other. This makes for a very entertaining, heartfelt story.

The main down of this movie is its pacing. It is a little too long at the end, and definitely drags thing out around the third act. Additionally, it feels longer than it should be and probably should have wrapped things up earlier than it did. However, this doesn’t compromise the movie at all, and it’s still a very entertaining film.

Overall, The Big Sick is a smartly written, hilarious romantic comedy that addresses its subject matter in a heartfelt, authentic way.

One thought on “The Big Sick- Movie Review”