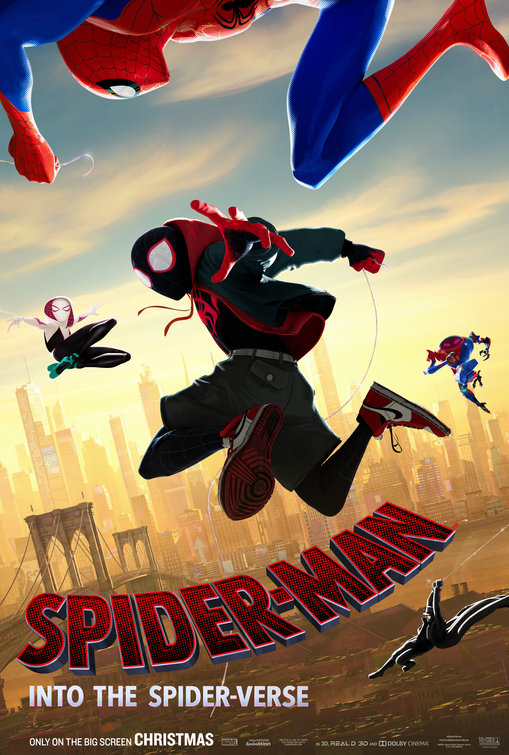 Spider-Man: Into the Spider-Verse – Movie Review

Note: This is an advanced, spoiler-free review of Spider-Man: Into the Spider-Verse, which opens in theaters this Friday, December 14.

Spider-Man: Into the Spider-Verse left a wide smile on my face from the opening credits to the very end of the (hilarious) post-credits scene. This movie manages to be a comic book movie in every sense of the word, but takes the genre to places somewhat explored in The LEGO Batman Movie, something that I really liked, but does it in such a crazy, bold, and above all slick way that you won’t be forgetting this one anytime soon after you watch it.

Slick’s a phrase that would describe this movie pretty well and is a word that kept popping up in my head the first 15 minutes of this because everything in this movie is just so effortless and cool, yet still so impressive to look at. This has been said a million times before, but it’s being said here: this movie is a comic book come to life. Into the Spider-Verse takes the animation format and uses it to turn everything you’re looking at on the screen into a comic book, full with thought bubbles and action noises during fights, both of which blend seamlessly with the format and visual style. There’s also lots of visual comedy that comes with the overall comic booky-ness of this movie. It would’ve been so easy for Spider-Verse to feel overstuffed or like there’s too much to process at once, but somehow it manages to always feel streamlined, while you can still tell the immense style and detail shoved into every corner of this movie.

At various points throughout Into the Spider-Verse, I found myself in awe. Not just at what I was watching, because believe me, this isn’t like anything you’ve seen before, let alone in the animation genre. I was in awe at how many different parts of this movie shot a smile straight to my face. This is one of the best comic-book movies ever because everything that makes a good comic book movie is turned up to 11. It’s a good personal story about Miles Morales, works well as a hyper self-aware comedy, and works as a really good animated movie too.

The action keeps in line with the movie of being great on paper, but having the potential to be an overload much on the screen, but, just like the rest of the movie, is great onscreen too. From the very first action set-piece, the film shows establishes what it’s gonna look like, and does a pretty good job of blowing you away meanwhile. The action is fluid and easily to follow even while juggling lots of things in the background. The third act looked truly crazy to watch on the big screen, and wouldn’t be possible outside of the animation, and specifically this movie’s take on animation, format. But another thing that keeps the action grounded are the characters. From each set-piece to another, you’re constantly rooting for the characters on screen because of how good of a job the movie does establishing them. Even the supporting Spider-Men, like Spider-Ham, Spider-Man Noir, or Peni Parker (with a mechanical SP/DR suit), while not given too much actual depth, are given just enough backstory provided with just enough hilarity that you’ll be smiling at every one-liner each of them crack.

Back onto the characters, this movie has a lot but does an impressive job balancing all of them pretty well. Naturally, Miles Morales (Shameik Moore) gets the main focus, but the lazy, worn-out version of Spider-Man (Jake Johnson) is fleshed out super well too. You understand his motivations, and why he’s there, and he has his own style of humor, a key aspect of being a Spider-Man, alongside all of the other Spider-People too. But Miles Morales is the star of this story, and he does a great job showing that. We get a sense of who he is, and why he’s doing what he’s doing, but the movie shows quite a bit of his personal life too, from his interactions with his parents (Brian Tyree Henry and Luna Lauren Velez) to his friends to his uncle (Mahershala Ali), which ties back to a throwaway line from Spider-Man: Homecoming in a way that got me really excited. Spider-Gwen (Hailee Steinfeld) is also a lot of fun, and her relationship with Miles and Peter is a lot of fun to watch too. John Mulaney and Nicolas Cage both stand out as Spider-Ham, a…  pig-detective who’s also Spider-Man, and Spider-Man Noir, a 1930s vigilante who only appears in black-and white. Both had me cracking up everytime they came on screen and were welcome additions to the cast.

Especially for an animated movie, Into the Spider-Verse did an exceptional job managing the tone. At times, it was deeply touching and emotional, at times shockingly dark, but most of all, it knew when to take a breath and have a laugh. This aspect of fun and the humor is present throughout the movie, but is never hammered over the head too much, an issue that movies like LEGO Batman and Deadpool run into. When Spider-Verse tries to be serious or emotional, it knocks it out of the park, whereas films like the other two I just mentioned face a great deal of tonal inconsistency. The humor is consistently great, and there are lots of parts that are directed towards fans of the character and his mythology. Some references go by pretty quick, so if you’re a big fan of the character, make sure to keep your eyes peeled for some hilarious references. It’s also meta and self-aware like the aforementioned LEGO Batman Movie and Deadpool, but doesn’t go too far where it’s basically winking at the camera. Written by Phil Lord, who along with Chris Miller, who produces, directed the Jump Street movies and The Lego Movie, Spider-Verse often feels like it was done by them, from the way certain jokes are told to some of the references in the background.

However, this never feels like it alienates those who aren’t too familiar with the character, as, at its core, Spider-Verse tells a human story with real characters that you can feel. Its references come from a place of love, whether its from the movie’s heartwarming, truly touching Stan Lee cameo, or the abundance of visual gags hidden in each frame. It has a universal message, furthering hammering down the fact that this can be enjoyed by a variety of audiences, those familiar and unfamiliar with the character, and those of all ages.

The pacing in this is also breakneck. It moves along its rich, concise story like flipping through the pages of the comic book. It takes its time to breathe but also knows when to keep moving and always keeps the audience engaged. Clocking in at just under 2 hours, it feels nowhere near its length, and with most blockbusters, let alone comic book movies, being overlong, this is a breath of fresh air.  Spider-Verse leaves you wanting more of its stunning animation, likable characters, mile-a-minute humor, but most of all, its touching, developed story. This was exactly what it needed to be, and much, much more.