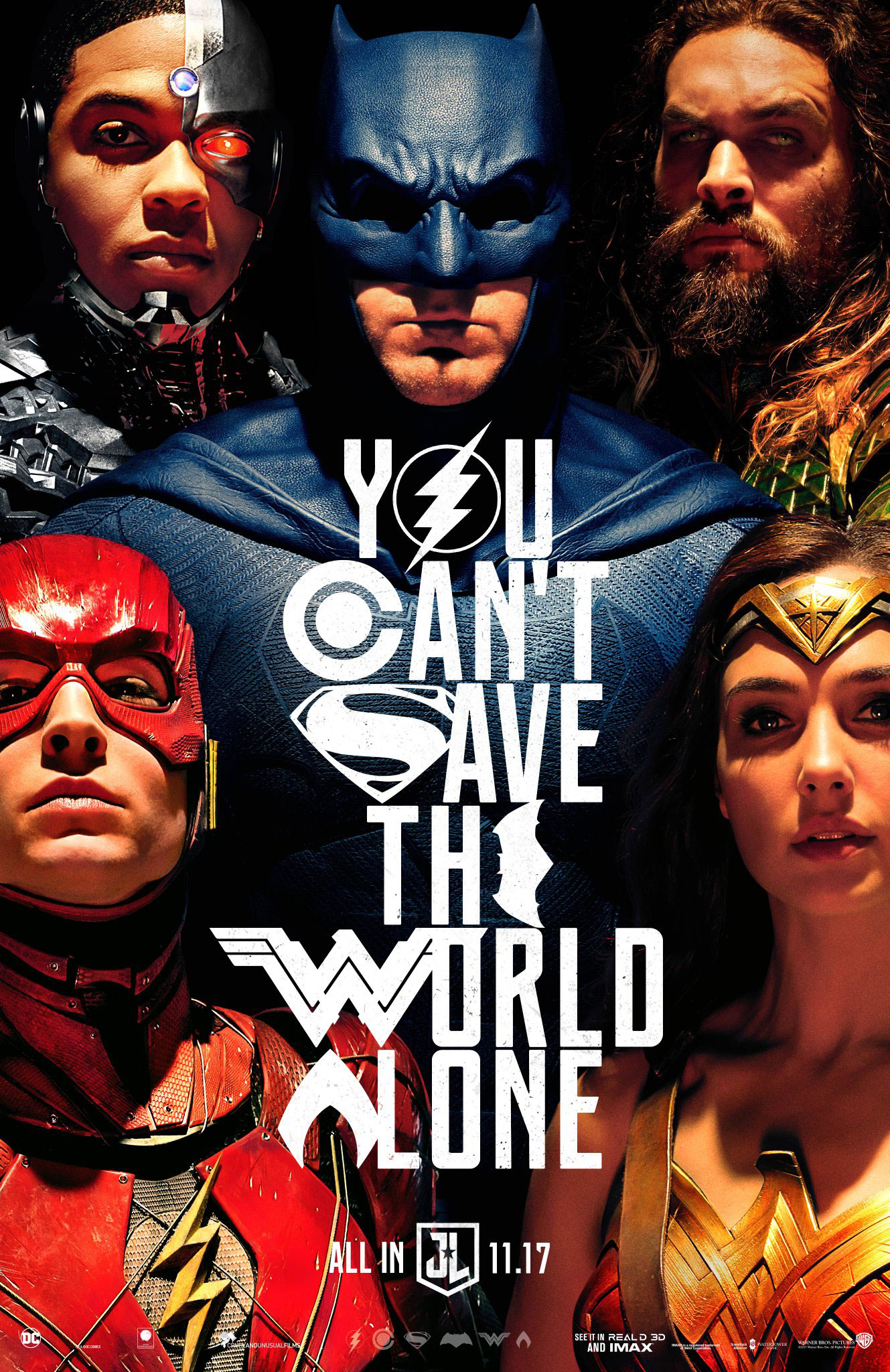 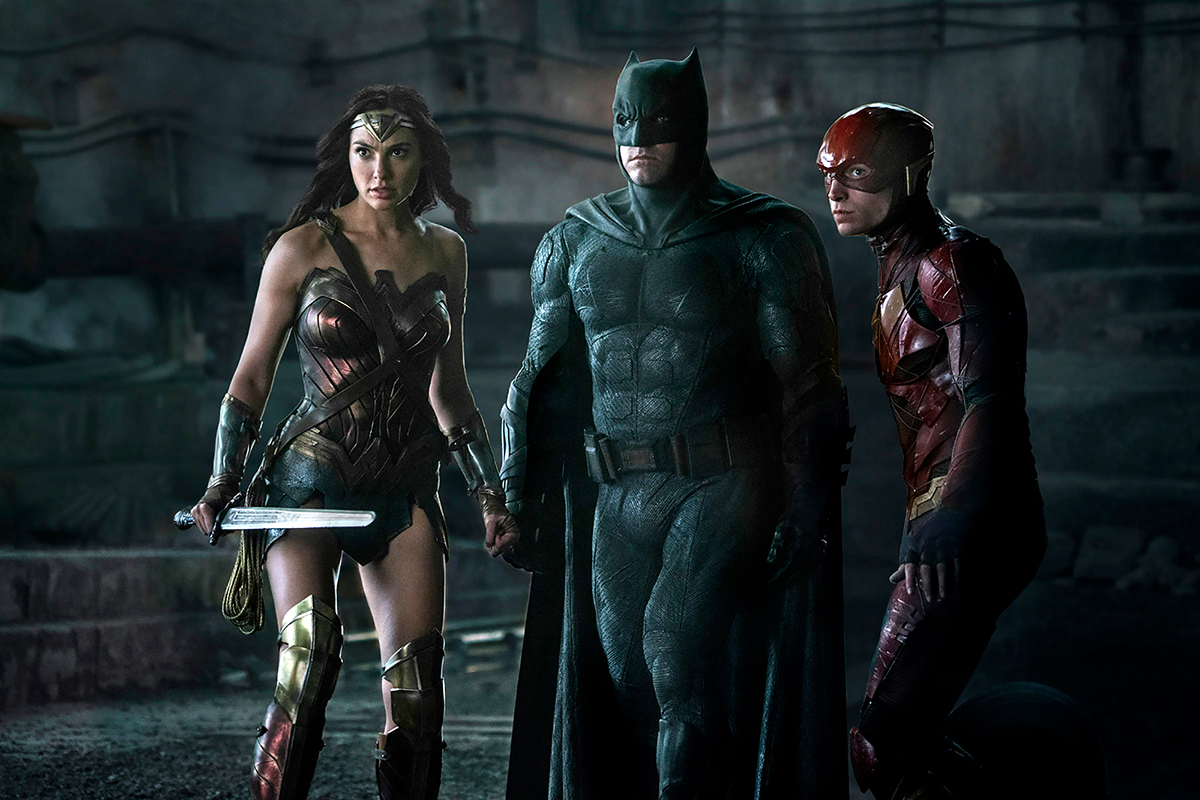 After the death of Superman (Henry Cavill), Batman (Ben Affleck) is forced to assemble a team of other heroes, including Wonder Woman (Gal Gadot), Aquaman (Jason Momoa), The Flash (Ezra Miller), and Cyborg (Ray Fisher) to fight the incoming threat of Steppenwolf (Ciarán Hinds).

Justice League is a disappointing, but moderately entertaining movie. It has great performances and fun characters, as well as plenty of humor and a hopeful tone, but the rushed plot, CGI mess of a villain, and lackluster, sloppy visual effects make it just decent.

The characters (mostly) and acting were pretty strong in Justice League. First off, The Flash/Barry Allen was a lot of fun here. He gets some of the best jokes and acts as comic relief and “the rookie” of the group. Ezra Miller is really good as Barry Allen . He has a lot of fun moments interacting with his teammates. Aquaman, another new character, is just…so awesome! Jason Momoa gives the character a very confident, cool demeanor that’s super entertaining to watch. Gal Gadot is, again, excellent as Wonder Woman, and she remains a strong character, being the highlight of the last two films she was in. Also, we finally get a hopeful Superman! That’s what character is supposed to be like, although in Man of Steel and Batman v Superman, we got a very mopey, brooding Superman that wasn’t too in line with the character. Henry Cavill shows us what an optimistic, actually fun Superman would look like.

There’s quite a bit of humor in Justice League, as the trailers have promised, and most of it comes from the group dynamic among the team. Warner Bros. has acknowledged criticisms of a lack of humor and levity in other DC Extended Universe movies and made an effort to make this one more light-hearted. There are lots of funny gags throughout, and it’s an easy, light watch. Yes, it can be a bit cheesy at times, but it’s cheesy in the right ways. Because Joss Whedon, director of the (much quippier) Avengers movies, came in after Zack Snyder, who directed Batman v Superman and Man of Steel, had to step off, you can see the film have a bit of his touch. He’s known for a lot of banter between characters, and you can see that on show.

As far as action goes, this movie (mostly) delivers. There are lots of action scenes sprinkled throughout, and they are very entertaining, especially in the final battle where the whole “Justice League” teams up. There are also two great post-credits scenes here. The first is a quick gag that’s pretty funny and the second is a genuinely surprising reveal that gets me very excited for the future of the DCEU.

Justice League stands at 2 hours, which is shorter than most superhero movies these days. That’s generally a good thing, but not for this movie. A lot of scenes feel rushed or cut down significantly and there are some side storylines that never get revisited and are just there for the sake of being there. The movie didn’t know where to spend more time and where to spend less: some scenes go on for too long or shouldn’t be there, whereas others feel just skimmed over. It has a very messy plot that piles scenes on top of each other without any flow.

Some characters were subpar also. For example, Cyborg is really bland. He has his own storyline that’s not very interesting and is supposed to be a key character, as he has a special connection to what the villain wants. He is also one of the most powerful in the group, but the audience doesn’t really care about him. Ray Fisher’s performance comes off cold and dull for such an important character. Ben Affleck looks almost bored playing Batman and is very unenthusiastic in his role. Also, although Superman’s entrance is pretty awesome, he’s absent for most of the movie and sort of hangs over it before he’s “resurrected”. It feels kind of abrupt when he just shows up.

Steppenwolf is undeniably the worst part of Justice League. He’s just another CGI monster that wants to destroy Earth for the sake of being evil and was almost unwatchable. I nearly cringed whenever he was onscreen and he doesn’t feel like a real threat. You know nothing about him except for the fact that he’s powerful and evil. Every time he shows up, he mumbles something about having to destroy everyone like a video game villain. He was a weak, underdeveloped, and boring villain.

For such an expensive ($300 million!) movie, you would really expect better effects. The effects are very sloppy and obvious. Cyborg is an almost entirely CGI character, and he looks awful. The visual effects are not great on him and are really obvious. Also, Steppenwolf, who is similar to Cyborg (mostly CGI), doesn’t look that good, and you feel like you’re watching video game graphics when you see him. A lot of this movie is shot on green screen, which is common, but so many shots are glaringly obvious. Sometimes, it’s painfully clear that green screen is being used, which took me out of the movie a little. Some of the action, combined with the messy visuals, can be really chaotic and hard to follow, which detracts from the film.

Overall, Justice League is just fine. It’s not awful, but it’s definitely not great either. Its characters and their interactions provide for lots of humor and a more fun, hopeful tone, but it has an awful villain, embarrassing CGI, and a messy, rushed plot.