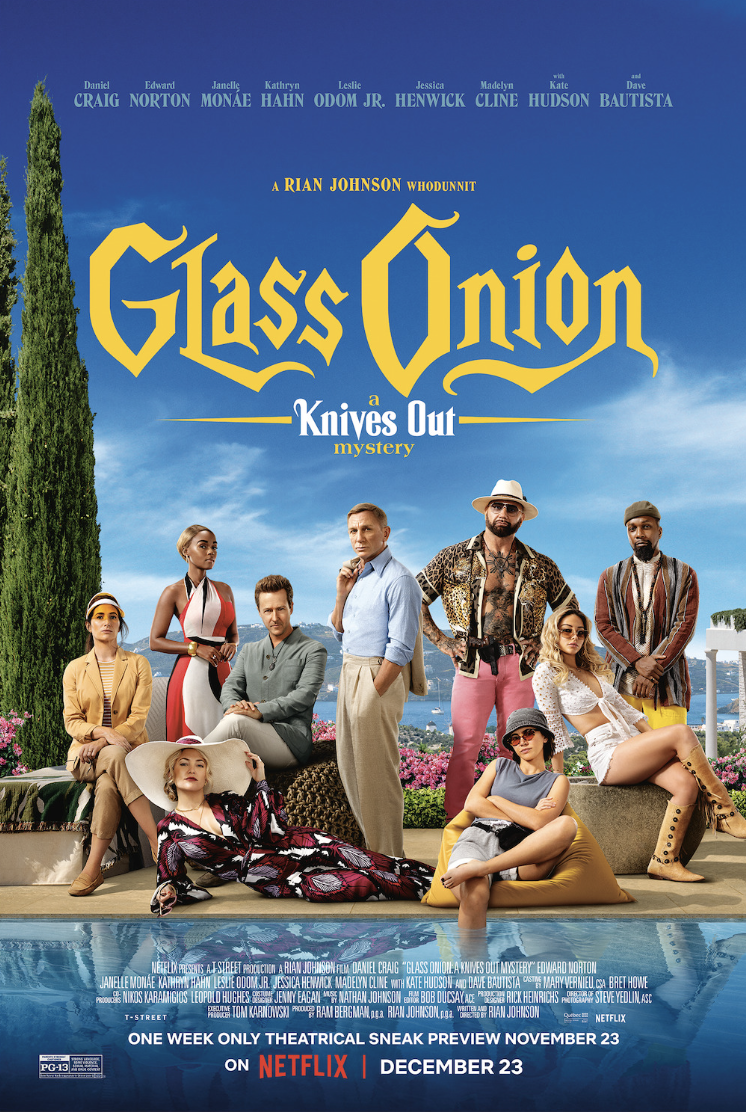 Once again written and directed by Rian Johnson, but with a whole new cast of characters (aside from Daniel Craig, who returns as detective Benoit Blanc), Glass Onion is the sequel to 2019’s Knives Out, this time set on a Greek island and focusing on “a mystery surrounding a tech billionaire and his eclectic crew of friends.” The film is in theaters for this week only before its wide release on Netflix on December 23.

It’s a shame that Glass Onion is only being shown in theaters for one week; arguably more than the first one, this is an incredibly fun film to watch surrounded by audience reactions. I couldn’t help but get nostalgic seeing this three years to the day after the first and with a fully packed holiday weekend audience, with a whole pandemic in-between that is somehow now functioning (as you’ll see in this film) as a narrative reference point for film and TV. And despite the fact that this is ultimately a Netflix release, Johnson manages to capture a sense of original blockbuster wonder and intrigue that is hard to find in major releases nowadays.

And on top of that, he has made a very pretty movie. The film takes full advantage of its gorgeous Greek vistas (as well as its elaborately, cleverly designed set), making for shots that both take in the beauty and leave room for mystery.

As for the screenplay, the first 10 minutes of Glass Onion had me worried that it would sound more perilously like Johnson’s Twitter feed than the first, but my worries were quickly quelled, as this broadly satirizes its characters and their real-life contemporaries in rat-a-tat fashion. It lands most of its humor, which is (by nature, because of the larger scale) much broader, and as a result, less punchy than the first film. But even where the humor might be lacking or somewhat toothless, Craig’s performance continues to be a standout, with his now iconic accent and strong comedic presence chewing up the scenery.

This is a film that will undoubtedly benefit from several viewings. The mystery is less tightly executed and a solid deal less satisfying this time around, but certainly more brazen in the way it reveals information to the audience. At its worst, Glass Onion almost feels contrived and a bit overbearing in how much it dumps on the audience, but at the very least, it’s in no way derivative of the first film.